Laying the groundwork for charity regulatory reform in Canada

Mowat NFP’s new release, the second in its Enabling Environment series, aims to set the stage for the design of a new legislative framework governing the charitable sector in Canada.

Canada’s charitable sector is at a crossroads. Heavy demand for services is already straining capacity. If, as seems likely, charities face a future of slow revenue growth, the gap between demand and capacity may degrade the quality of the supports it provides to the most vulnerable people in our communities.

This paper reviews the federal charities regulatory regime, and discusses the limitations of this regime as designed and administered today. It summarizes past reform efforts and international lessons, and recommends high-level changes by which the federal government and the sector can begin to build a more responsive regulatory framework. 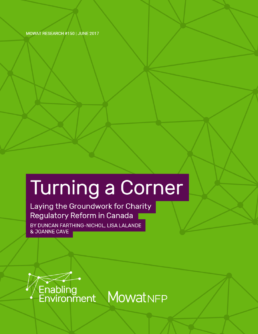 The social sector is a key strategic partner to Canadian governments as they seek to address big challenges like poverty or climate change.

Charitable and nonprofit sector modernization has been the subject of much recent debate and discussion in Canada. The federal government has signalled significant interest in renewing its…